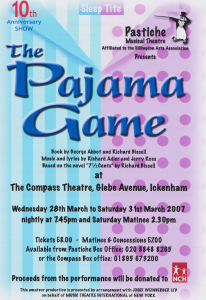 In 2007, our tenth anniversary production was the Broadway classic The Pajama Game

Conditions at the Sleep-Tite Pajama Factory are anything but peaceful as sparks fly between new superintendent, Sid Sorokin, and Babe Williams, leader of the union grievance committee. Their stormy relationship comes to a head when the workers strike for a 7 ½ cent pay increase, setting off not only a conflict between management and labour, but a battle of the sexes as well. 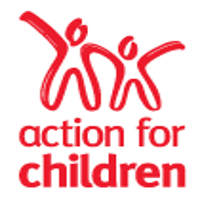 songs including Racing With The Clock, Once A Year Day, Steam Heat and Hernando’s Hideaway.

The production raised a record equalling £2,750 which was donated to NCH – The Children’s Society. The charity has since been renamed as Action For Children.