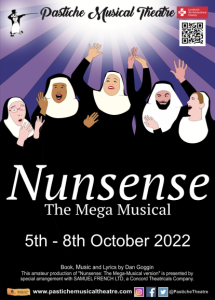 The all singing, all dancing Little Sisters of Hoboken had to put on a fundraiser after a small ‘accident’ (well, a great big one!) at the Convent. The sisters revealed their host of hidden talents in this unforgettable show, including tap dancing nuns, an audience quiz and comic surprises a plenty – a truly heaven-sent evening or afternoon was spent with us!

Nunsense is an international phenomenon and is the second longest running show in Off-Broadway history. We were thrilled to have had the opportunity to stage a brand new production of the show, which was well received by our audiences over five performances.

We were over the moon to conclude our 25th anniversary year by bringing our nuns out of hibernation and finally stage our production of this funny, tuneful and enjoyable show, which was originally set to hit the stage in March 2020.

The production raised an incredible £1405 for the London Air Ambulance.