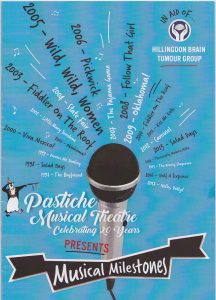 Musical Milestones was Pastiche’s 2017 summer concert, returning to the Compass Theatre after our record breaking production of Hello, Dolly! and concluding our 20th anniversary celebrations

Featuring songs such as One Night Only, Tell Him, If I Were Not Upon This Stage, Therapy and two medleys showcasing our twenty year history, we entertained audiences for four performances with songs from musicals including The Book of Mormon, Ghost, Chicago, A Little Night Music and The Witches of Eastwick.

The production raised over £630 which was donated to the Hillingdon Brain Tumour Group.