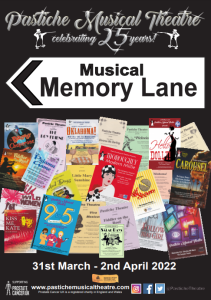 Between 31st March and 2nd April 2022, Pastiche returned to the stage after a two year hiatus, with a celebration of twenty five years of staging shows and raising funds for many charities.

Musical Memory Lane featured all of the musicals we have staged, including Hello, Dolly!, Fiddler on the Roof, Carousel, Oklahoma, 9 to 5 and many more, our production featured something for everyone as we looked back and performed our favourite songs from the shows we have staged.

We interspersed the songs with the Pastiche story, behind the curtain gossip and some wonderfully funny anecdotes from the last quarter century of performing.